WHAT CAN councils do in the face of government cuts to funding for local public services? Actually, they can do a lot.

Councils in England, for example, control budgets totalling £114 billion pounds, over one fifth of all public spending, with responsibilities for housing, adult social care, education support, transport, recycling and waste collection, libraries and many other services. That’s a powerful starting point from which to organise a fightback against relentless Tory austerity.

The Trade Unionist and Socialist Coalition (TUSC) has a core policy platform for local elections (see http://www.tusc.org.uk/policy) which includes the commitment given by every TUSC council candidate to “vote for councils to refuse to implement the cuts”. We will not support cuts to council jobs, services, pay and conditions.

The TUSC policy platform argues that “the best way to mobilise the mass campaign that is necessary to defeat the dismantling of council services is to set a budget that meets the needs of the local community and demands that government funding makes up the shortfall”. A campaign of defiance.

It goes on to say that TUSC “will support councils which in the first instance use their reserves and prudential borrowing powers to avoid making cuts” – as the first step to building such a campaign of resistance.

A document produced by the TUSC All-Britain Steering Committee, Preparing a No Cuts People’s Budget: Notes, correspondence, alternative budget proposals and other material from previous campaigns (2021 update), available as a PDF here.

A series of TUSC reports under the heading, How Much Reserves Have They Got?, providing brief statistical profiles of councils that have Labour-led administrations, showing the substantial resources that could be mobilised by Labour councillors – if only they were prepared to fight. The latest report will be published in autumn 2021.

The TUSC directory of the local elections taking place in May 2022, when over 6,500 council seats will be contested in England, Scotland and Wales. Available here.

A how-to manual to contesting local elections, A Guide for TUSC Candidates and Agents. Check out the TUSC website resources page for the 2022 edition, to be published in autumn 2021. Meanwhile, the guide for last year’s contests can be found here.

Listen to the podcast: "Are no-cuts council budgets possible?": 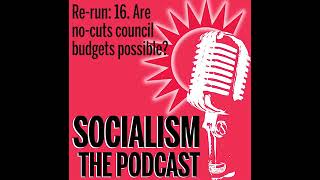 What Could Be Done

What can councils do in the face of government cuts to funding for local public services? Actually, they can do a lot.

Councils in England, for example, are responsible for over one fifth of all public spending, with responsibilities for housing, adult social care, education support, transport, recycling and waste collection, libraries and many other services. That’s a powerful starting point from which to organise a fightback against relentless Tory austerity.

Covid has revealed both the drastic situation our local public services are in – with councils massively underfunded by central government – but also some of the many things local authorities have the power to do to improve our lives. In the first lockdown, for example, councils acted against homelessness in their local areas through the Everybody In scheme. Many councils stepped in during autumn half term to continue free school meals. But they could go so much further.

Most current councillors however, including unfortunately the majority of Labour's 7,000 or so local representatives, would say they cannot use their legal authority to act without first getting funding from the government. But that's the wrong way round. TUSC argues that councils should first spend what's needed – and then demand the money back from the government.

The multiple U-turns made by Johnson and his chancellor during the pandemic, spending billions when public pressure was on them, show that if just a handful of councils used the powers they have to refuse to implement any more cuts and spend what is necessary instead, the Tories could be made to pay up.

Contents © Dark Verb and others. All Rights Reserved.
Built by darkVerb